Lying in the heart of Uganda is a wildlife park like no other, its atmosphere so unique that it allows those who enter its vastness to immerse themselves in the unpredictability and endless wilderness that is the true quality of Africa. Enjoy a traditional safari in Queen Elizabeth National Park-probably the best option since it contains a wide variety of wildlife and is easily accessible in the western corner of Uganda. 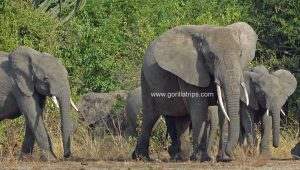 Covering an area of 1978 km2 that stretches from north to south along the Lake Edward border, you are given over to an almost indescribable wildlife experience. Certainly, it ranks with the best in Africa and is the flagship of the country’s national parks – rated as the ultimate safari experience. The park is located at the base of the ‘Mountains of the Moon’ – the Rwenzori Range – and the views from some of the camps are simply spectacular. It can be reached in about 5 hours on a reasonably good road from Kampala and there is a dirt road running all the way to Bwindi Forest. If you plan to hire a car in Kampala and drive yourself, note that the speed limit is 100km per hour, though it changes in different areas. Take note of road signposts, many traffic police on the road will charge you for overspeeding, or overtaking in corners, or for driving a car in dangerous mechanical conditions. This is Africa, vehicles are old, you are advised to hire a car from credible car rental companies such as 4×4 Uganda Limited, Uganda Self drive, Road Trip Uganda, and 4×4 Kenya among others.

Invigorating crystal clear air, beautiful scenery, tranquil ambiance, and an abundance of wildlife offer you a special and personal African wilderness experience at Queen Elizabeth National Park. The park boasts a conservation success story of wildlife such as the African lion, Buffaloes, leopard, Herds of elephants, tree-climbing lions in the Ishasha sector, antelope including the native Ugandan kob. Birdlife is prolific with about 611 species – a quarter of Africa’s total bird-life, and over half of Uganda bird species! The park covers an area of about 2000 sq km characterized by rolling hills, savannah grassland, lush rainforest, crater lakes, and the Kazinga Channel that connects Lakes Edward and George. This 32km long body of water runs between Lake Edward and Lake George and is filled to the brim with hippos and crocodiles. See these animals from a sundowner boat cruise down the channel.

The park is expansive and most tourists choose to stay in and around the village on the Mweya Peninsula. Visit this national park and discover the wonders of Uganda’s wildlife and scenic beauty. Its status and beautiful setting make it a winner. For those wishing to get off the beaten track, the Ishasha Sector is remote, rough, and ready with its tree-climbing lions. Come and join these diverse pilgrims and share unforgettable moments sipping sundowners in any of the accommodation facilities, watch the eagles soar over Uganda’s skies, hear the echo of elephant trumpets, take a treetop walk or just relax and absorb the surroundings. Queen Elizabeth National Park is rich in biodiversity and great scenic beauty 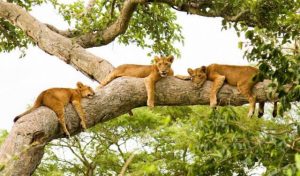 Where to stay while in Queen Elizabeth National park

In terms of the range of accommodation offered within Queen, no national park in the world quite lives up to the same level of service. Queen Elizabeth National Park has a large number of rest camps and lodges and even some overnight hides run by both Uganda wildlife authority and private investors. Mweya Lodge is the luxurious privately-run game lodge that steals the show when staying in the Queen Elizabeth National Park, as a trip is transformed into something more like an experience – the pace of life slows to a leisurely tempo, your every need is catered for, and extravagance is not spared-All this in the wild heart of Africa – small wonder that the Queen Elizabeth Park has the reputation that it does.

Up until fairly recently the only accommodation inside Queen Elizabeth national park was privately run Mweya lodge. However private operators have established lodges run in a similar way to the luxurious private land on the boundary of Queen Elizabeth National Park, like Kyambura Game Lodge, Jacana Lodge, Katara lodge, and Engazi lodge. These private game lodges are not bound by most of the rules of the park, but they offer incredible luxury, superbly guided game drives, and the freedom to move into the greater park area if desired, although there is more than enough to occupy you when staying here. These private game lodges offer a more intimate and exclusive experience of the vast Queen Elizabeth National Park.

The most celebrated of these luxury private lodges include Kyambura Game Lodge situated on the escarpment of the gorge where the familiar call of the Fish eagle, gracefully thatched accommodation and breathtaking scenery are yours to enjoy. Jacana Safari Lodge is surrounded by true wilderness that offers romantic and elegant rooms influenced by indigenous Ugandan cultures; whilst Ishasha Wilderness Camp lies on the Bwindi tourist route known as the wild frontier, with views over the Ishasha River just 05 kilometers away from the Ishasha Gate on the southern side of the Queen Elizabeth National Park.