There are many activities and attractions that can be enjoyed in Lake Mburo National park, some of them include; Game drives, these go through the park and will allow you to see many of the animal species as well as the birds. You also make sure that you have a ranger from the park headquarters to be able to point out the many bird species as well as the mammals. This park is also the only one in Uganda with the Impalas and the Eland. We also have leopards and lions. This is also the only national park where you find the Burchell zebras and the zebras can be found in Kidepo National park in northeastern Uganda.

The fantastic scenery of these rolling hills, swamps, the lakes also make Africa so real, this is also were the Tanzanian savannah meets Uganda’s most scenic style. There are also the nocturnal game drives in Lake Mburo National park that is one of the memorable activities one can do. You get a chance to view all the animal creatures at night including; the lions, bush babies, and the porcupines. You will also be able to view all the things that move at night, the drive is also normally 2 and a half hours in the length of having dinner at the lodge.

The boat cruises on Lake Mburo will also get you to view the flora and fauna of the lake. Along the banks, you will also get to see many animals that come to the water most especially in the dry season. You will get to see the crocodiles, hippos, buffaloes, antelopes, and the 3 types of otters that are found in the park. You will also view many birds along the shores of the lake.

Birding in Lake Mburo National park, this park is also one of the best regions for birding in Uganda with over 350 bird species that are found in the park. The bird lovers will find the swampy valleys of Miriti and Warukiri as well as at the roadside between Rwonyo camps and the jetty that are good areas for bird watching and you will be lucky to see the shoebill stork, the grey crowned crane, the black-bellied bustard, the red-headed lovebird and many more.

There is also the nature walks that are taken anywhere in the park with an armed guide/ranger from the park management. You will meet many animals including the hippos, hyenas, eland, zebras, topis, giraffes, antelopes, birds, buffaloes, and the butterflies.

There is also the Rubanga forest which has got close canopy past arrangements that have to be made with Uganda Wildlife Authority. This forest is also good for bird watching and has got 40 bird species that have been recorded in the forest. There are also many tree species that include; the Palayycaluz and the Markhamia palm, acacia. 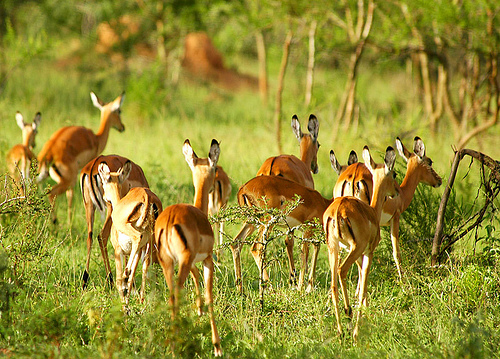 Visit Salt Lick Area: There is also the salt lick, you will have a guided walk with an armed ranger towards the salt lick and you will see the animals as they lick the salty soil that is found there. There are also hideouts that have been created by Park management were the tourists can stand and then see the animals around. This is also an early morning nature walk and takes 2 and a half hours in length

There is also fishing since Lake Mburo National park has got 5 lakes inside and this makes it easy to carry out fishing. Lake Mburo is the largest of all and the fishermen come to the lake to fish as well as the visitors to the lake. There are also 6 species of fish that are found here and Tilapia being the main species. Spot fishing can also be carried out, the fishing gears can be arranged and the main fishing spots are found at Mazinga.
The other activities that are found on Lake Mburo National park include; Horseback riding safaris, the bicycling tours, the Igongo cultural center, as well as the equator visits.

Lake Mburo National Park is just a 2hrs drive from Kampala / Entebbe International Airport via Masaka Mbarara highway. The road is very nice in that, one can just rent a car in Kampala and drive your own adventure to explore Lake Mburo, National Park. However, those on self-drive tours are advised to hire professional rangers to form the Park headquarters to help you spot un-popular animals like leopard among others.

Only strong 4×4 Jeeps are highly recommended to take a self-drive tour in Uganda’s Lake Mburo National park because some parts of the road are very bad and impassable especially when it rains. Such cars include Toyota Prado, Land Cruiser, Nissan Patrol, Land Rover, Super Custom/Min-Van, or Toyota Rav4 among others.