Rwanda’s tourism sector has stood for long mainly because of the unique tourist attractions and the most exciting tourist activities in the Volcanoes National Park. The park is located in Musanze province, the northwestern part of the country. It is mainly credited for its remarkable five of the eight Great Virunga Volcanoes which include Gahinga volcano, mount Bisoke, Sabyinyo, Muhabura, and Karisimbi; the unique endangered mountain gorillas, Rivers, and Lakes, Caves, and others. Volcanoes National Park was gazetted around 1925 which makes it one of the ancient conversational areas in the whole of Africa. There is a lot more in an offer for visitors to exciting their minds while on safari to this protected area.

Below are some of the incredible tourist activities for you to engage in Volcanoes National Park. 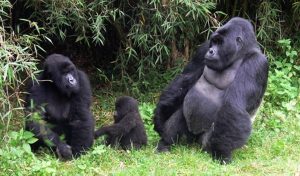 Mountain gorilla trekking adventure in Volcanoes National Park plays a crucial role in Rwanda’s tourism sector. About ten (10) families have been designated for visitors to catch a glimpse of these unique creatures while they are still in their natural habitat. Among others include the Susa A family, Sabyinyo, Amahoro, Hirwa, Uganda, Agashya, Kwitonda, Umubano, Karisimbi, and Bwenge among others. Like any gorilla destination, trekking permit is a must to have in the Rwanda Volcanoes National Park and permits are obtainable at $1500 per tourist. One permit allows you to track one habituated group in a group of eight visitors. Permits are accessible through a local tour operator or through the Rwanda Development Board head office. Your trek takes you from one hour to eight hours but this will depend on your speed, nature of the habitat, and location of the gorilla family that will be allocated to you to track. Volcanoes National Park is about 2 to 3 hours’ drive from Kigali International Airport.

Besides tracking mountain gorillas in Rwanda, the Volcanoes National Park is where silver meets gold! The golden monkeys are a few fascinating creatures that are worth tracking while on safari in Rwanda. They are largely found within the Great Virunga Mountains ranges of Volcanoes National Park and Mgahinga Gorilla National Park in Uganda. The golden monkeys are a subspecies of Sykes monkey also famous as the blue monkey. There are 2 groups that have been habituated for visitors to track all of which consist of 80 individuals. The adventure begins at 7:00 am local time. For lifetime experiences with these striking creatures, permits can be purchased at $100 per visitor. The trek can last up to four hours with only one hour of face to face encounters with the primates. Most of these unique species largely live within the bamboo forest of Volcanoes National Park and can be sighted playing or feeding.

Volcanoes National Park is exceptionally one of the Important Birding Areas (IBAs) in Rwanda. It refuges more than 200 unique species of birds with mainly the Albertine rift endemics. The notables for you to spot include the Rwenzori Turacos, Rwenzori double collared sunbird, Handsome Francolin, strange weaver, dusky crimson wing, collared Apalis, archer’s ground robin, Grauer’s rush warbler, red-faced woodland warbler and many more. Birding safaris can be combined with primate safaris in Volcanoes National Park while you are on safari in Rwanda. 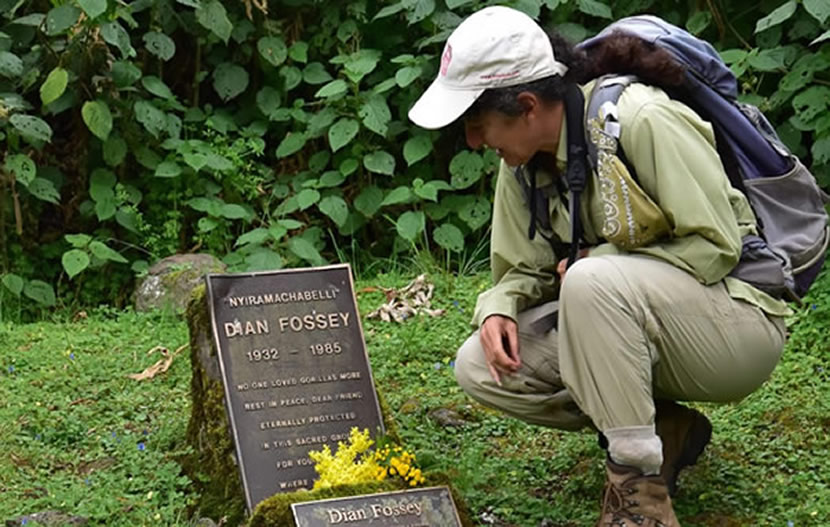 The Dian Fossey tomb hike is one of the remarkable activities and experiences that you shouldn’t miss out while on safari in Volcanoes National Park. This adventure allows you to explore more about Dian Fossey’s conservation life. She is credited for devoted work to save mountain gorillas that today the world boasts about. She is credited for her book which later turned into “Gorillas in the Mist” movie. This mainly talks about Dian Fossey’s life and her research camp in the Volcanoes National Park. The treks usually take up to 3 hours where you find the beloved gorillas “Digit” and her resting site. She established Karisoke research center to help her research work around 1967 and she carried out research on mountain gorillas for 18 years. Unfortunately, she was mysteriously murdered in 1985. The hike to the tomb site rewards visitors with the stunning features and wildlife species, birds and not to forget primates. This lifetime adventure currently costs $75 per person.

Volcanoes National Park offers refuge to several volcano mountains which are worthy of hiking while on safari in Rwanda. For hikes life-changing hikes, you can climb Mount Bisoke which features the most beautiful Crater Lake on its top. The adventure takes visitors up to (7) seven hours plus the two that you spend while descending back to the starting point. The hikes start at 7:00 am with a briefing from park official and then you will be assigned a guide. Mount Bisoke stands at 3711 meters above sea level and it features a number of stunning floras, and offers an opportunity for visitors to catch a glimpse of the remarkable views of Virunga Volcanoes and the Crater Lake “Ngezi.” The hikes are less strenuous and even a person without experience can hike through it.

6- Hiking through the Karisimbi Mountain

This volcano features as the highest out of all the 8 Great Virunga Volcanoes. It stretches up to 4507 meters above sea level and features as the sixth highest in Africa. To hike to its summit, you need two days and above where you will first camp around 3700 meters and catch a glimpse of stunning Mount Bisoke. The second day takes you to the summit and returns to where you started from. The hike rewards visitors with views of many geographical features, vegetation, and sceneries. This mountain was named after amasimbi which denotes a white shell in Kinyarwanda due to its white-capped summit. The trek is breathtaking compared to Bisoke Mountain but the experiences thereafter are worth it. 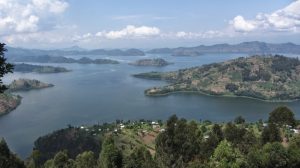 Rwanda comes with twin-like Lakes that join each other. They include Lake Bulera and Ruhondo. The hike to these Lakes rewards visitors with magical views of not only the Lakes but also the Russumo waterfalls. You will also meet local residents paddling the canoes while others riding the wooden boats. The walk also comes with views of several bird-life like cinnamon breasted bee-eater, common moorhen, paradise flycatchers, and stonechat, grey throated tit, long-crested eagle, African marsh harrier, and many more. This activity can be done in the morning and afternoon.

Musanze caves feature among the few most historical sites in Rwanda. They are situated within Musanze town just adjacent to Volcanoes National Park. The caves have existed for over 65 million years and they have 31 entrances and extend up to 21 kilometers inside. They were formed from the flow of Basalt layers of Lava that spread form Virunga Volcanoes of Sabyinyo and Bisoke. The Musanze caves offered a home to many people as well as the storage of supplies and food by the kings of Rwanda during the wartime. The exploration lasts for two hours and visitors pay $50. It can be done in the afternoon with an escort. Other caves include the Busasamana caves which are located one kilometer and link up to many other caves such as Kazenze, Mubende, and Busasamana regions. There is also Mugongo cave for you to explore and all these are among the famous 52 caves.

Buhanga forest lies outside the Volcanoes National Park boundaries. Buhanga sacred forest features the rarest flora and diverse historical and cultural experiences of the Rwandan traditions. It is believed that most monarchical kings of Rwanda used to bath around the forest prior to taking over kingship and at the end, the site was referred to as a sacred place and people never cultivated on it or even cut down trees. It is also believed to sometimes change colors during certain seasons which mark the year. The walks through this forest can be done in the morning or afternoon. The trails are made of Lava stones and they extend throughout the forest.

For cultural experiences, visitors can pay a visit to Iby’Iwacu cultural village. This a local community project set forth by ex-poachers at the park but today they have chosen to support conservation and protection of mountain gorillas and other wildlife species. The project was large to transform poachers from their acts to support conservation efforts in the park. You can combine cultural experiences in this village with gorilla trekking safaris and explore more on traditional styles.

In conclusion, Volcanoes National Park rewards visitors on safari in Rwanda with a number of exciting and unforgettable experiences given its distinct activities that are worth participating in. However, access to the activity centers requires a strong 4×4 car due to the nature of the roads. To those on self-drive tours, you can hire a 4×4 car in Kigali at a good price, and recommended cars include Land Cruiser, Rav4, and others.