A trek to see the striking golden monkeys in Rwanda’s jungle is one most fascinating experience you shouldn’t miss to be part of. It offers you the opportunity to encounter the stunning golden monkey; a rare primate species in Africa. In Rwanda, they can be found in Volcanoes National Park and these unique creatures feature a prominent golden fur coat making them a few rare creatures to look at. This thrilling adventure is usually done in addition to mountain gorilla tracking in Volcanoes National Park.

This category of unique species mainly thrives within the Virunga Massif region which covers parts of the Democratic Republic of Congo, Rwanda, and Uganda. Around the Rwanda Volcanoes National Park, you can find these amazing creatures within the bamboo shoot while feeding.

About 2 (two) troops have been habituated and readily available for golden monkey tracking experience in Rwanda with the largest group thriving within Sabyinyo and comprising about 80-100 members. Golden Monkey tracking adventure is usually done once in a day and kick starts early in the morning like any primate adventure in Volcanoes National Park.

At about 7:00 am, you gather at the park headquarters for the morning briefing on dos and don’ts for golden monkey tracking and then connect to a point where the treks normally begin from. This point is about 15 minutes off from the edge of Volcanoes National Park, the best gorilla safari destination in World. 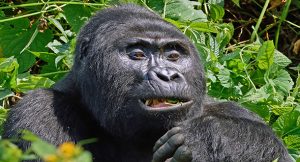 In most cases, golden monkeys spend much of their time on top of the bamboo and they are very jumpy and while taking photos, one has to be very sharp otherwise you can miss catching clear pictures. But interestingly, due to habituation, most of them have got used to human presence and you can have a good time with them, explore their behavior, and also take as many photos as you can. However, this category of primates is so playful and leaves travelers delighted with their behaviors.

A trek to see these remarkable primates isn’t that strenuous as most of the monkeys can be traced around the bamboo forest in an area that is generally gentle hence making it simpler for one to hike through. Interested trekkers need to have just basic fitness and they will be good to go.

What to carry for golden monkey tracking in Volcanoes National Park Rwanda?

Like mountain gorilla trekking, golden monkey adventures equally require one to be well prepared and pack appropriately for this life-changing experience. The most significant items to consider in your packing list include golden monkey trekking permits which cost $100 per person, rain jacket or poncho, bottled water, camera, good hiking boots, or shoes that are waterproof and lightweight.

Where to stay while on golden monkey tracking?

The available accommodation options for tourists on the golden monkey tracking safari in Rwanda to opt for overnight stay in Volcanoes National Park range from lodges, hotels to camps. Most of them are found adjacent to the park and takes you about five minutes to walk their or an hour to the starting point. These accommodation facilities range from luxury to budget. The luxury ones cost about $500-1500 each person, mid-range goes for $100-$290, and budget / basic accommodations range between $25 – $100 per person.

Other Places to Go for Golden Monkey Tracking in East Africa

Other than Volcanoes National Park Rwanda, the other safari destination where the mountain gorillas co-exist with golden monkeys in Mgahinga National Park, located in South Western Uganda. Each golden monkey tracking permit costs US$50, plus US$40 for park entry fees. Mgahinga Gorilla National Park has one habituated gorilla family known as the Nyakagezi family. Each gorilla permit is currently at US$600 per person, but from July 2020, the price of gorilla permits will increase to US$700 each for Foreign Non-Residents.

Other tourist activities in Mgahinga National Park include mountain hiking (Mt. Muhabura and Sabyinyo), bird watching, caves exploration, and Batwa Trail among others.