Karamoja region has stored very many rich which are great tourist attractions and attract so many people from different parts of the world.

Kaabong District lies to the Extreme northeast and is home to Kidepo Valley National Park, the haven of wildlife species. Kidepo valley national Park is the only National Park where one can spot Cheetahs on Uganda safari holiday. 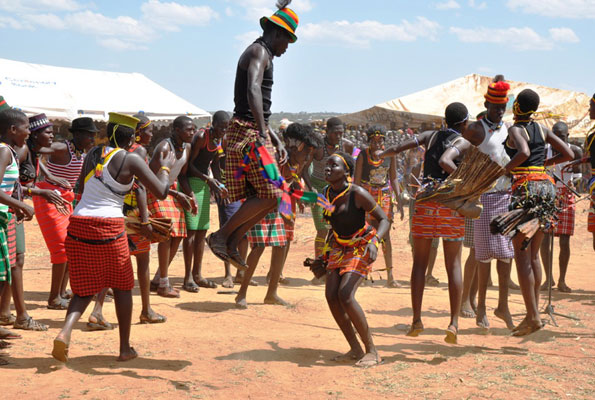 Kidepa valley is one of Uganda’s rich national parks with diverse wildlife and surrounding culture and was ranked by CNN as one of Africa’s Top Tourist destinations in 2014. The park is visited by tour ads of visitors every year on self-drive and guided tours.

The region is a semi-arid plain with a harsh climate and annual low rainfall. It is largely covered by savannah seasonal grasses and occasional small trees. The climate of the region favors the existence of savannah wildlife like elephants, buffaloes, lions, leopards among others. Tourists on Uganda safari to this region should put on light clothing and should carry with them many boxes of water.

Karamoja lies at around 1400 meters (4500 feet) above sea level with the largest mountains being mount Kadam, Mount Moroto, and Mount Napak lying at the boundary of Karamoja. These mountains can be great attractions if promoted well as tourists’ attraction in addition to mountain gorilla safaris in Uganda for which the country is most popular.

Karamoja Sub-region in 2011 was the site of an important Fossil discovery. The discovery was made by Paleontologists who discovered the remains of Uganda pithecus major, a 20 million-year-old ancestor of the present-day primates and thus putting Uganda on the map in terms of the scientific world.

The people in this region are mainly Pastoralist who believes that wealth depends on their cattle and that they are the only one to have the right to owning cattle. They however portray one of the richest cultures in Uganda.

Today, a Uganda safari is incomplete without visiting the northern part of Uganda where you will experience the unique cultures of the Karamajongs and the magnificent Kidepo Valley National Park.