Gorillas are categorized into five groups each in different countries of Africa such as Uganda, Rwanda, Democratic Republic of Congo, Nigeria, Central African Republic, Cameroon, Equatorial Guinea, Gabon, and Angola among others. The 5 types of mountain gorillas are; Mountain Gorillas, Cross River Gorillas, Western Low Land Gorillas, Eastern Low Land gorillas, and Grauer’s Gorillas. Gorillas are a major attraction in some countries of Africa and one of the leading foreign exchange earners in countries like Uganda and Rwanda. 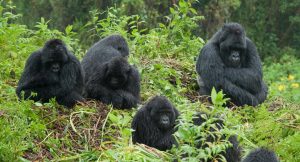 Among all, Uganda is thought to be hosting almost half of the world’s mountain Gorilla population camouflaging the tropical Bwindi Impenetrable Forest (with 440 gorillas) and Mgahinga forest National Park while the rest are found in Virungas: Volcanoes National park in Rwanda and in the Virunga National Park of the Democratic Republic of Congo. Mountain Gorillas are mostly found in mountains and tracking them requires some level of fitness. This is one of the endangered species of Apes with only 880 individuals left in the whole world (Gorilla census Report, 2011).

The fact that mountain gorillas are endangered and at risk of extinction, many people travel from different parts of the universe to see these gentle giants in their natural habitat. Mountain gorilla tourism is booming in Uganda and Rwanda and the number of visitors per day is regulated to protect them and their habitat. One must have a gorilla permit that grants him / her permission to join a group of other tourists to search for habituated gorillas in their natural habitat. There is a wide variety of gorilla safari packages online offered by Tour Operators and Travel Agents in Kigali and Kampala. Contact more than one operator and choose one with the best offer. Their charges vary but depend on the number of days you want, activities, cars to be used, and lodges.

Gorilla tourism in the Democratic Republic of Congo (DRC) is hindered by political instabilities. The country is some times insecure to an extent that tourism activities are stopped in some parks like Virunga, Kahuzi Biega, and Nyiragongo mountain.

Cross River gorillas rank among the world’s 25 most endangered primate species. They are similar in appearance to the western lowland gorillas. They live in highly populated areas, man has encroached to their habitat, and their habitat has been destroyed by human activities like agriculture, timber production, and livestock. Poaching is also common in the forests as well, and the loss of even a few of these gorillas has a detrimental effect on such a small / critically endangered population. In Africa, mass education is still needed to sensitize people about the usefulness of the Gorillas, and in so doing, the cross River Gorillas will be preserved. Cross River Gorillas are thought to be the most endangered African ape. 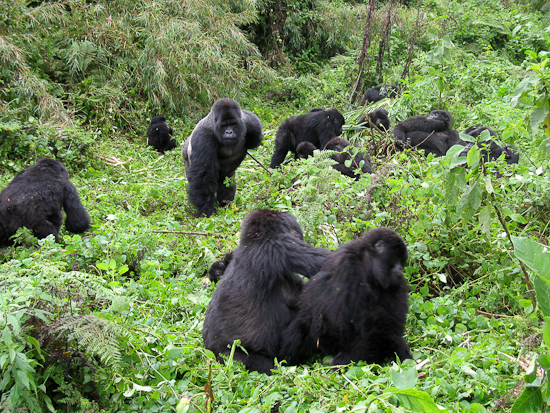 Efforts to protect these animals are focused on securing the forests that house them. Partners have worked with the governments of Cameroon and Nigeria to create a protected area for the Cross River gorilla that spans the border of these two nations.

Cross River Gorillas are among the rarest primates and once thought to be extinct, this unique subspecies of gorilla reappeared in the 1980s and is found only along the southern section of the Nigeria-Cameroon border.

Preferring habitats of low- and mid-elevation rainforest and montane forest, the remaining Cross River gorillas live in roughly 11 subgroups dispersed amongst the region’s highland areas. Researchers have also recognized a number of socio-ecological distinctions. Like other types of gorillas, Cross River gorilla also reproduces slowly, with females giving birth only once every four to five years. The population of the cross River Gorillas is estimated to be fewer than 300 individuals.

The western lowland gorillas are endangered but common than mountain Gorillas. They live in heavy rain forests, and it is difficult for scientists to accurately estimate how many survive in African countries like DRC, Gabon, Cameroon, Equatorial Guinea, Central African Republic, and Angola. They are quite smaller, have shorter hair and longer arms compared to their mountain cousins. They can climb trees but mostly found on the ground. The leader organizes troop activities like eating, nesting in leaves, and moving about the group’s three-quarter- to 16-square-mile (2- to 40-square-kilometer) home range.

They are also called Eastern lowland gorilla, lives exclusively in the eastern Democratic Republic of Congo, which has endured more than a decade of warfare and instability. Grauer’s Gorillas are a subspecies closely related to the mountain gorilla.

Gorillas are the largest primates in the world, and Grauer’s is the largest of the four gorilla types. Males can weigh more than 500 pounds. As large forest mammals that feed predominantly on vegetation, they are an important influence on the natural composition of plant communities.

Like other types of Gorillas, Grauer’s Gorillas forms 5 to 30 members led by a male silverback.

WCS conservationist George Schaller was part of a team that conducted the first survey of Grauer’s gorilla in 1959.

All four types of Gorillas share the following facts in common:

They are intelligent and are capable of using materials like stone, sticks, and so on during their routine work.

Gorillas are strong and can defend themselves in cases of an attack.

Gorillas form groups that are led by experienced silverbacks.

They prefer staying in forested areas.

Gorillas are huge and spend many hours of the day feeding.